While I was working on The Book Redesign Project, I took a moment to analyze what I’ve created thus far in terms of where they fit in their respective story universes. What I discovered was interesting, but not surprising in retrospect.

Both of these books exist in The Falling Stars Universe (Falling Stars isn’t finished yet, but I have every intention of knocking it out one of these days. It’s one of those books that I always wanted to write, but have been delayed for one reason or another. A lot like how Parallax evolved to be.)

It occupies its own pocket universe, one that I’ve thought about revisiting but have shied away from because when your choices are War and War, it doesn’t leave much wiggle room. Apologies if I’ve inadvertently given out a plot spoiler.

The Flagship novel that established its own story universe. I’m working on the first of two sequels, Parallax: Genesis, as part of an overall book trilogy that I am thinking of expanding into a new series that will pick up where Parallax: Darkfall (as yet unwritten) leaves off.

All of these books are currently available through Amazon.com in both Kindle and Print formats. There is a link to my Amazon Author Page in the “About” Section of the Blog.

The Book Redesign Project is wrapping up soon. That’s a fact. As soon as the print covers get to me and are uploaded, it’s back to the same old, same old with my writing projects.

But will it really be the same old, same old, now?

I mean, I’ve already gone outside my usual modus operandi by paying a professional cover designer to Cosmetic the crap out of Corona, The Three Safeties, Vessel, and Parallax and they’re turning out great. Why not reevaluate other areas for improvement?

There are two areas that I tend to shy away from:

1) Paying for services that I don’t feel I need.

2) Multitasking, because screwing up 11 different things at the same time is not smart nor efficient. 😉

Of course, I’ve already done a half-gainer with a jack knife into #1, so that’s kind of irrelevant now and the announcement that I’m about to make will also make #2 equally a non-issue.

After some thought, I have decided to split my time between finishing Lights and Shadows and planning the sequel to Parallax, entitled Parallax: Genesis. I’ve written in the past that changing up projects can help keep things fresh, but that was on a theoretical level. Now, I’m talking about actively working on more than one project at the same time. I’m going to start with these two projects and see where it takes me. Maybe it will work and maybe not. No harm in trying.

I value your inputs, so please feel free to drop a comment or two. Thanks for your time. 🙂

Note: I’m taking a break from my usual article format to do regular posts to update you on recent events. I may continue to do things this way for a while because I’m finding it more relaxing.

Man, the past few days have been busy. Corona’s face lift is done and while I wait for developments on The Three Safeties, Vessel, and Parallax to move along, I thought I would take some time to have a chat with you all.

I like where things are going with this new direction I’m taking. Sure, there was some cost involved, but that’s the price we pay to play in the sandbox so I have no regrets on that score. The current situation has been a wake-up call to me that I was growing complacent with my development as a writer and must be open to new techniques and experiences in order to improve my abilities. Old School Habits are hard to break and even harder to leave behind when they don’t serve their original purposes.

In for a penny, in for a pound, I suppose.

Since, I’ve crossed the first boundary (paying for a cover designer), I’ve decided to open myself up the prospect of finding a professional editor and someone to assist me in promoting my work. I’m taking things slow due to limited resources, but I am open to the idea. I still think Beta Readers and Critique Groups are somewhat of a waste of time because I don’t create based on consensus or committee, but that attitude may fall by the wayside yet.

I finally got the finished print cover for Corona earlier and I’m back to share it with you while the friendly folks at Createspace chew on it for a while. In addition, I received some promotional graphics that I thought would be fun to include. Enjoy. 🙂 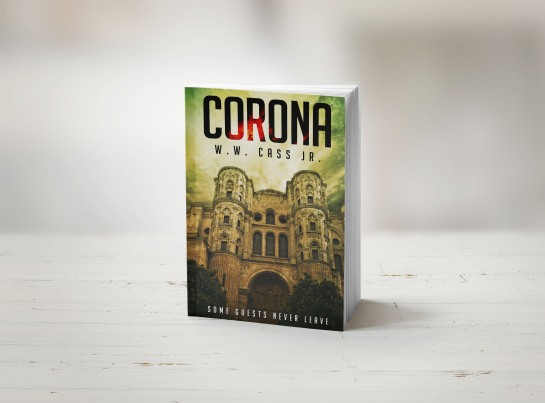 I finally put in the last of the new book cover orders for The Three Safeties, Vessel, and Parallax, a few minutes ago. Remember what I said about believing in what I’m doing and investing in myself? Well, I still believe it, but next time I’m going to find a more economical way to take my dreams to the next level…hehe.

Seriously though, it feels good to know that I can get my work out there in the best light possible. Every step I take as an independent author is a new learning experience and I wouldn’t have it any other way. Yes, I’ll keep telling myself that as I pay off the expenses over the next 6-12 months. 😉

Anyway, now that that’s out of the way, I can move that stuff off to the side and get back to finishing Lights and Shadows. I’m not fond of the business side of this affair, but it is what it is. 🙂

I’m having one of those fairly rare mornings where it’s quiet and I can wrap myself in my thoughts and consider how my day will go. Right now, I’m waiting for the first drafts of Corona’s print cover to find its way into my inbox while checking out new covers for The Three Safeties.

I relish quiet mornings. No sounds around me, no distractions, and a general sense of peace of mind. I love that. Most of all, the quiet allows me the opportunity to be creative and open to whatever my soul dredges up from its nether regions. They also allow me to put the few inner demons I have to rest in favor of moments of unbridled optimism.

Times like these I consider precious because they also allow me to unleash my imagination and let it run wild, to explore limitless vistas of self-expression which eventually find themselves on my pages.

I don’t have enough of these times, but I’ve learned to deal and appreciate when I have them.

Where do you want to go?

All my books and more are at: W.W. Cass Jr.'s Amazon Central Page.